Two is Better Than One: The Success of Crowdraising Techniques 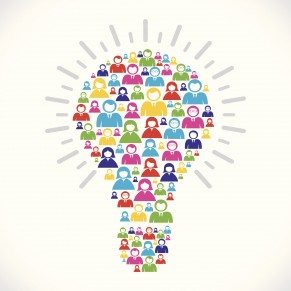 Crowdsourcing is a technique used by organizations and businesses to obtain services and ideas from large groups of people. The general concept is to combine the efforts of crowds of volunteers or part-time workers, where each one could contribute a small portion, which adds into a relatively large or significant result. Often described as “distributive problem solving,” this technique can start companies and charities, get them off the ground with funding, and even track progress. When outsourcing from a large group of people, you are gathering collective talent, intelligence, and expertise.

There are many websites that can help you support or start a charity.Crowdrise.com and FirstGiving.org are online sources that help organizations plan fundraising for their cause. Nonprofits can make their own page for fundraising and tracking, while individuals can make their own page to donate money to the organizations of their choice. The Crowdrise campaign “Pushups For Charity” Boot Campaign has raised 500,000 dollars to “Get Fit. Have Fun” and “Make a Difference.” FirstGiving raised a total of one billion dollars and 8,000 nonprofits have already used the online app.

In 2012 Lay’s potato chips used crowdsourcing for their “Do Us a Flavor” social media campaign. Fans were able to submit their ideas for the next Lay’s potato chip flavor with a chance to win one million dollars or 1% of the chip’s 2013 net sales. The competition has been narrowed down to three finalists. You can still vote on Cheesy Garlic Bread, Chicken & Waffles or Sriracha flavored chips!

Artists who cannot get projects funded the traditional way can turn to their fan base and crowdsourcing to produce their work. Cartoonist Doug TenNapel used the crowdsourcing site Kickstarter to raise money to publish a 250 page, hardcover book of sketchbook drawings. He set a goal of $18,000 and raised more than $115,000.

Crowdsourcing draws on the notion that Two is better than One. Utilizing a large group of people combines individual talents to create a multiplying effect. This is a great new tool, particularly for nonprofits looking to make a difference.