Don’t Forget to Feed Me 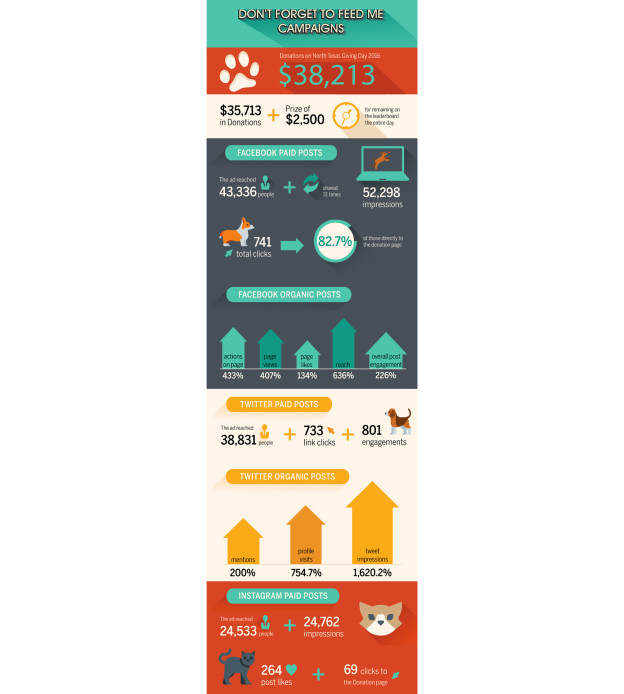 Don’t Forget to Feed Me (DF2FM) — a nonprofit organization in Fort Worth that provides pet food to owners who are unable to afford it — pawed our door with a “sit”-uation. They asked the Cause Agents to help them exceed their previous year’s donor contributions during North Texas Giving Day, which is one day where people from all over come together in support of North Texas nonprofits.

The previous year during North Texas Giving Day, DF2FM gained media attention and raised a whopping $35,000. This time, they needed to raise even more, so they came to TCA for help. We told them not to pant and set to work.

We evaluated their social media channels (Facebook, Twitter and Instagram), found that Facebook was their strongest platform (with Twitter in close second) and created a game plan accordingly. Armed with a “pet”-thora of puns and a solid strategy, our Cause Agents were off to the races with clever captions and adorable pet photos as well as silly gifs of cats and dogs. Once language and imagery were approved, we implemented our social media strategy.

The Cause Agents created daily posts for DF2FM and interacted with and engaged users on all channels. We created a Facebook event page for their North Texas Giving Day campaign and purchased online ads on all social media platforms. Working hard to re-engage new and existing followers, we made sure people didn’t forget about DF2FM’s cause.

In the end, we helped DF2FM exceeded their North Texas Giving Day goals. They raised $35,713, remained on the leaderboard the entire day and won a $2,500 prize because of their leaderboard status. This put them at a total raised of $38,213. The bonus treat: their social media engagement drastically increased.

Ultimately, we achieved what our client had thought im-“paws”-ible.

For a full-sized image of the infographic, click here.